The place where the time stopped. Suzdal, Russia

We went to Russia in May. It was the best time to visit this country – beautiful warm weather and a lot of juicy green colors. Our destination was Ivanovo city, where our Russian part of the family lives. Of course, we spend a lot of time in this city, but we were traveling around as well!

Samuel was the first time in Russia, and he was very excited! Everything for him was new. Imagine, how the Swiss Perfectionist looks at totally unperfect Russia. But he was in love. At the beginning, he even wanted to move here, but at the end, he changed his mind 😀

OK, let’s start our trip and our first place to visit was Suzdal.

The most famous in Suzdal is Medovukha. This is a honey based an alcoholic drink. Exist 124 sorts of it! You have from 5% – 16%. What is interesting, that this drink exists from XIV century, but very popular became in  XX century!

From lots of restaurants, we choose one with a name ” Zolotoy ruchey”. It was not bad, but also not so amazing. Kitchen, of course, is Russian. We ordered some fish, a grilled meat, and a cream soup from Porcini mushrooms. For two persons we paid less than 50 euro.

A design of the restaurant was quite interesting. Russian spirit is everywhere. You can see the bears and other animals ( ofc they are not alive anymore). The restaurant is very big and ready for a lot of guests. Also, you have a hotel in the same building and it is very close to main attractions of Suzdal.

Suzdal is the only city-museum in Russia. When you are walking down the streets you feel like you are in medieval times…You can also rent a carriage with the horse in a special Russian tack. We did not. Horses there look quite tired and kind of pure, so we just gave them a pat and walked with the own feets.

Our first stop was a beautiful church – Cathedral of the Nativity. 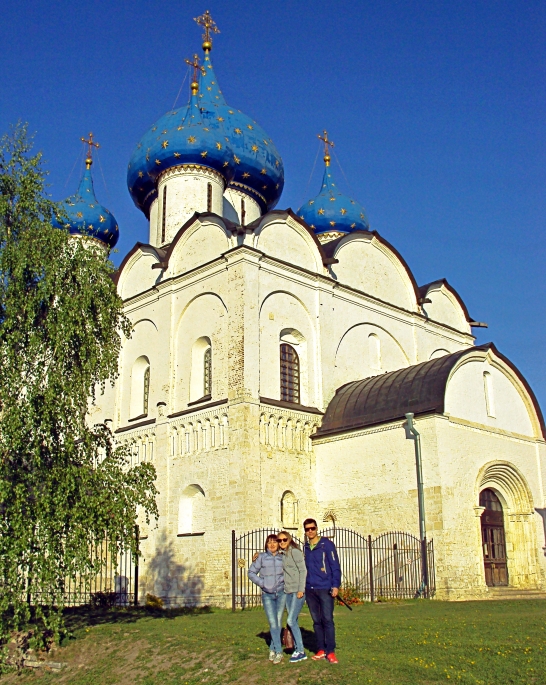 Why Russian church has domes in form of the onion?

This is a symbol of national faith which tend to the sky as a flame on the candle.

Cathedral of the Nativity was built in 12 century. After many rebuildings and many times burning the church still has a spiritual function and a museum inside. Unfortunately, we were not inside and we missed a lot!

This place is one of the darkest sides of Suzdal. This huge monastery was not just a holy place. Long time it was a prison. In times of Ekaterina II in 1776, it was a place for a “crazy prisoners”. Many of them died in this unapproachable tower.

Till 1947 the walls of this place were hiding prisoners. At the end, it was a prison for children. Just in 1968 Monastery of St Euthymius became a museum.

The Convent of the Intercession

Grounded in 1364. In 16 century it became a place of confinement for aristocratic females. In 16-17 centuries the Convent was the biggest in Russia. Here died many royal wives. Most of them came here forcibly.

We had just one evening in this incredible city and unfortunately did not go inside of museums and monasteries. But even this what we saw was enough to be admired! Would you imagine to go to Suzdal ones?

This site uses Akismet to reduce spam. Learn how your comment data is processed.